As we get older, more people around us seem to be called up to Heaven. Sadly, that means our life partners and best friends. No one knows the pain of losing a spouse better than 82-year-old Dan Peterson. After losing his wife Mary, Dan spent weeks just staring out into space. His grief felt like a massive blanket that he couldn’t lift — life wasn’t worth living without his beautiful bride. Thankfully, one four-year-old girl was able to pull away his blanket of sadness after a chance encounter at the grocery store.

Dan was grouchily walking down the canned vegetable aisle (grocery shopping is his least favorite chore) when a smiling face met his eyes. It was 4-year-old Norah, and it was her birthday! The overwhelming joy of her big day led Norah to reach out to Dan and say, “Hi old person. Today’s my birfday.” Norah’s mother Tara was mortified by her daughter’s comment and immediately rushed to apologize — but Dan wasn’t upset. In fact, he felt a sense of happiness that had been missing since his wife’s passing! Dan and Norah chatted happily about her birthday and interests for several minutes before they had to leave the store. Just before the left, Tara snapped a photo of the two new best friends 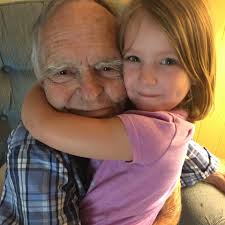 Tara posted the sweet photos with Dan as soon as they got home — and that’s when the unthinkable happened. Someone recognized Dan and said this was the first time they’ve seen him smile since Mary’s passing! Without a second thought, Tara got Dan’s number and set up a visit! Now Dan and Norah see each other all the time and their friendship has given Dan a second lease on life. Learn more about their heartwarming friendship here!